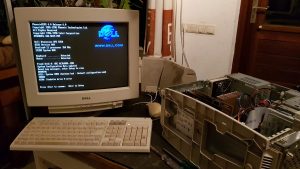 I spent Christmas this year at my parents home. Of course we had some really great family time, had dinner together, made a walk and did all the other cliché things. Like every year I use the extra days I spent at my parents, they live on the other side of the country, to do some browsing around at the attic finding memorable stuff from my youth. This year I found my old Pentium II MMX PC, one of the first computers we had and I was very curious if this computer would still work.

Getting it working again

Before I plugged anything in, I thought it is smart, to look under the hood first to see if it would not immediately catch fire as soon as I hit the power button. When I opened it I saw immediately a lot of unplugged cables and lot’s and lot’s of dust. So I started with removing all the dust and checking the cables. I used the PC as a server years ago and unplugged all devices not needed in a server. Later when the PC got superfluous I removed all the harddisks accept one, probably the old boot disk because it was only 6GB large. I was hoping it would still contain an OS, so I connected it again using one of the IDE cables and a power cable. Further I connected the power supply cable, and a old PS2 mouse and keyboard. Then the big moment came, for the first time in more then 10 years I was going to boot the system again. I was so excited, hoping it would still work and very curious what kind of applications I would find installed.

Booting up and playing around

Beside some small complains about a date not set it booted up perfectly and it felt great seeing the Windows XP logo after such long time again. Finally it booted all the way to the desktop and I saw immediately some great classic games again like GTA 1, C&C. Of course I tried them to see if they were still working and GTA 1 started without any trouble. Next I tried one of my floppy disks I found in a old box to see if they still work. Unfortunately after some beeping nothing happens. Windows is asking me to format the floppy but I don’t want to believe yet that it’s my floppy that doesn’t work anymore. Especially after trying a few more having the same issue I was wondering if not the floppy drive is the issue. Lucky for me I got a spare one. After installing this one I could read the floppy disks without problems. Of course I immediately started trying out some old games :-). 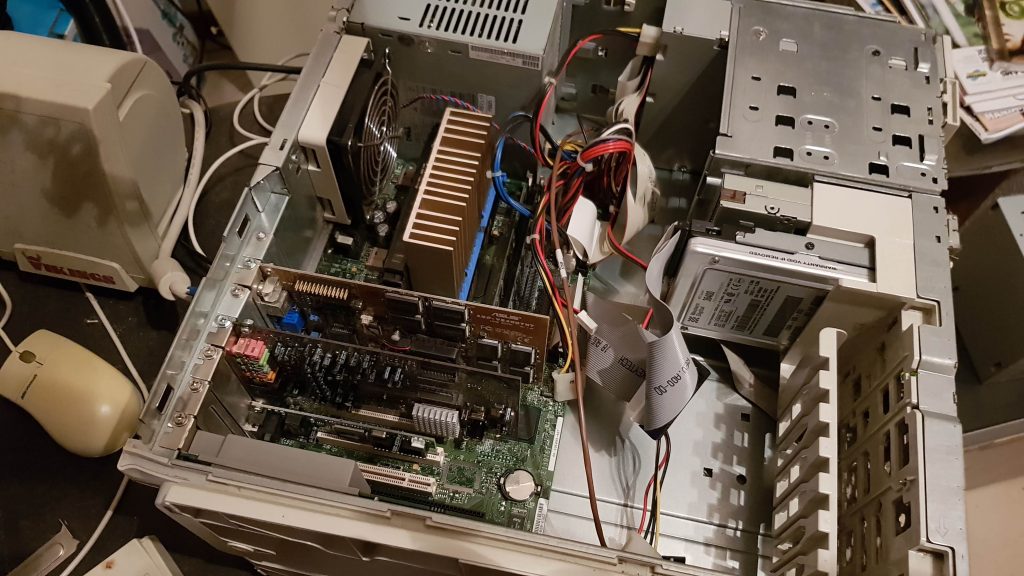 More problems on the way

When I started the first game I noticed there was no sound. I checked again the inside of the PC and saw that I removed the soundcard. I had no idea were I put it but I have some more old computers and removed one from another old PC. This PC had also an onboard soundcard so it would not miss it. After plugging it in the PC immediately detected the card but it wouldn’t want to install it, it could not find the necessary drivers. Unfortunality I couldn’t find the installation cd-roms anymore so  I tried connecting the PC to the internet to search them there. But using internet with IE6 is a whole new adventure by itself.  IE6 is refused to connect to all https websites even after disabling the Firewall. I don’t know the reason yet but it makes it nowadays very difficult to find drivers if you are limited to poor secured websites. So finding the drivers was almost impossible, because if I was lucky enough to find a download link it was not working anymore.

After trying multiple websites and finding out that all download links including the one on the official website were broken I had to go for a different approach. I found my old Windows XP installation disk and though giving that one a try. The 52x speed CD-ROM drive wasn’t connected anymore so I thought let’s just plug it in. But after rebooting all hell broke loose. ‘Operating system not found’ was the message. So I checked how the harddisk and CD-ROM player were configured. I put the HDD on master and the CD-ROM on slave, did not work. Then I put both on cable selected (CS) and put the CD-ROM at the end of the IDE cable, didn’t help either. Finally after some more attempts and checking the BIOS i gave up and disconnected the CD-ROM again. But the problem remained. What was going on?? Finally I decided to reset the whole BIOS and that fixed it. Now both CD-ROM and HDD were working fine. And the idea of using the Windows XP installation disk for the drivers worked also. Now I had a cd drive and sound!

After spending the whole afternoon getting the thing running  I could finally start playing some old games again. The first game I tried was one of my favorites that time, C&C Tiberium Sun. It was really fun playing that game again after such a long time. But it was also time to join my family again. After all it is christmas day ;-). 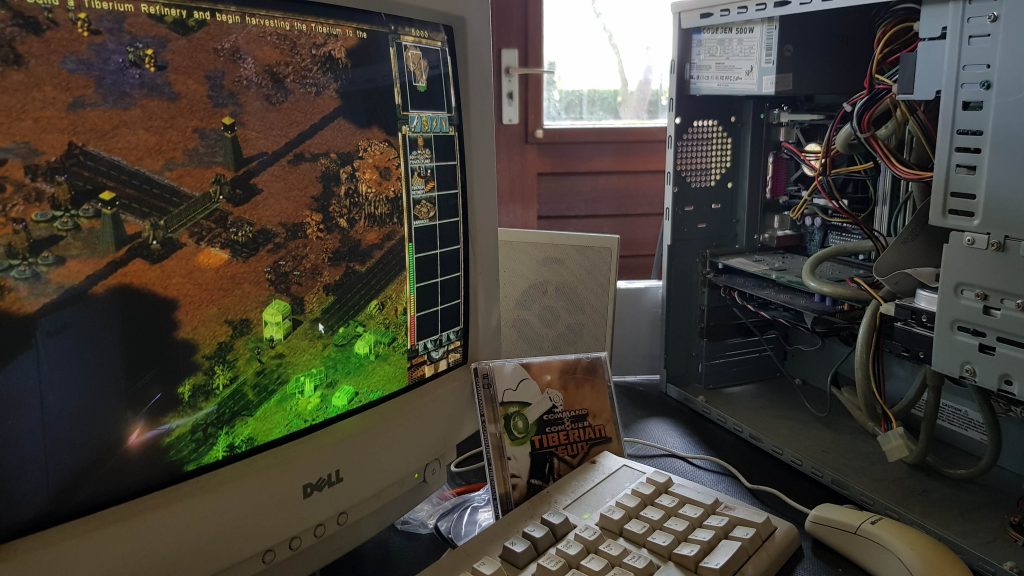